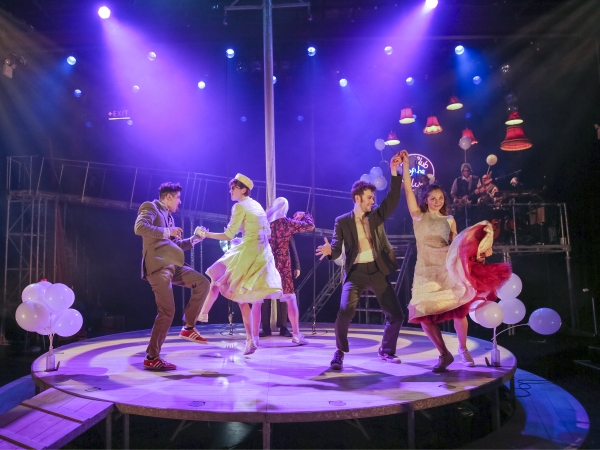 There is nothing quite like live theater. When a play is done well, it has the ability to engage the collective — the audience — to a shared emotional connection. And Kneehigh Theatre‘s “Tristan & Yseult” is done very, very well.

Presented on the University of Houston’s Wortham Theatre while the host Alley Theatre is being renovated, “Tristan & Yseult” is perfect theater. It is a moving, hilarious, daring, witty, sly and modern retelling of what is one of the oldest stories of star-crossed lovers. 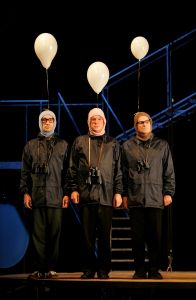 We are invited to enter the Club of the Unloved, complete with a live band. One should make sure to arrive when the doors open for the pre-show interactions with “The Unloved,” a nerdy, bespectacled group of “love spotters” who frame and assist the proceedings throughout the performance. One should also make sure to be around during intermission as the show doesn’t really stop. When one of the Unloved sings a song his “Nan” used to sing, it is a surprising, and comic, treat.

The story takes place in ancient Cornwall, the most southwestern tip of England. When King Mark is aided by Tristan, a French warrior/knight who was “born in sorrow,” in defeating the Irish King Morholt, Tristan becomes the king’s favorite (much to the chagrin of Frocin, the king’s lackey). Tristan is sent to bring the defeated king’s sister back to Cornwall to be Mark’s trophy queen.

One doesn’t need to be a student of drama to realize that a doomed love triangle is about to develop, but it is the way is develops that is so magnificent. The cast, in modern dress, move through the simple scaffolding set with ease, with the circular raised center standing in for Cornwall, Ireland, France, a boat, a forest — everything. With a few simple props, the audience is expected to use their imagination — something that Shakespearean audiences took for granted.

The Unloved are stage hands, soldiers, trees — whatever is needed. It really is an amazing ensemble where each component piece is integral to the story.

With that being said, there are standouts simply by virtue of the parts they are given. Niall Ashdown, who plays Morehouse, Hillary the Unloved, and the maid Brangian, is a consistent comic presence, and also the audience’s connection to the event, with his expository asides. Brangian is a classic theatrical fool, but his/her monologue following the queen’s wedding night is so full of pathos that one is almost moved to tears. Surely that is the mark of the great fool — it is they who, underneath the comic exterior, truly understand the truth of things. 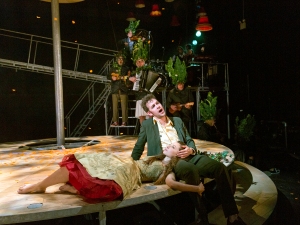 King Mark (Stuart Goodwin), Tristan (Dominic Marsh), and Yseult (Hannah Vassallo), are superb as the love-struck trio. The pain of the love triangle is palpable. But also, the way that falling in love is a potion that intoxicates beyond reason is also well presented. The staging allows Tristan and Yseult to literally fly with the intoxication of their passion.

Frocin (Damon Duanno), who wants nothing more than to prove his love for his king and have it returned, shows us the embarrassment that comes from trying just a little too hard. 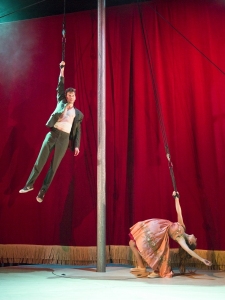 Finally, as the narrator “Whitehands (Kirsty Woodward) is superb. She appears to be a peripheral, although important, character until near the end, when she reveals why she is the most Unloved of all, with all the inherent pain that brings. Woodward’s performance is heartbreaking and reveals the very guts of the tragic story.

The show incorporates live, slightly twisted, versions of pop standards, as well as recorded music as diverse as Richard Wagner, Yma Sumac, and Nick Cave and the Bad Seed.

I was lucky enough tot see this show at St. Ann’s Warehouse in New York in the fall. I left that show believing that it was exactly what the theater at its best can be. Seeing it again, I fell even more in love.

But like all love, it brings sorrow. Sorrow that it will be a while before I see a production this good again. But like love, there is also hope that it is somewhere out there.

In love, nothing is ever “noir ou blanc” — black or white. But one thing is guaranteed — audiences will love this particular love potion.

“Tristan & Yseult” runs through May 24. For information, visit alleytheatre.org.