The Buck Stop at the ‘Little White House’ 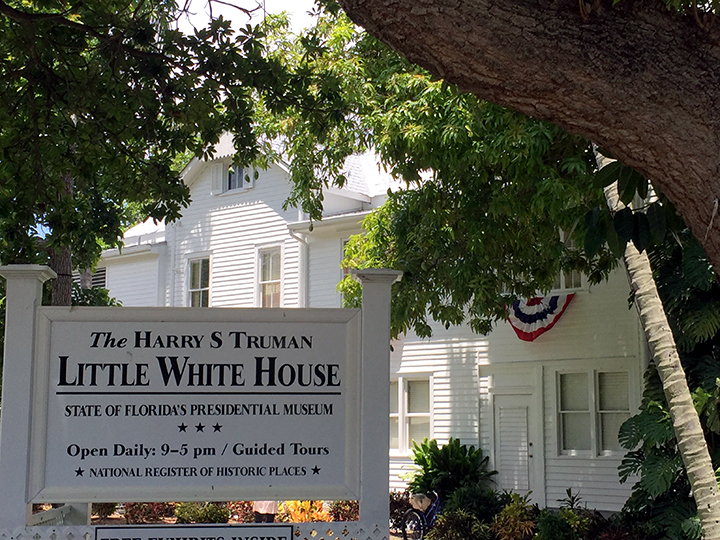 KEY WEST, Fla. — More than once, the southernmost tip of the United States was the center of government. In 1946, following President Harry S Truman’s first 19 months in office — a year when he was thrust into power, made the decision to drop the nuclear bomb on Japan ending WWII and signed the Employment Act of 1946 — he  was ordered by his doctor’s to take a vacation. He chose to visit hole out at the naval station in Key West. It was to begin a love affair with the locale that lasted his entire life.

Over his life, Truman made 11 trips to the island, for a total of 175 days, where he established a “Little White House” away from the Pennsylvania Avenue home he called “the finest prison in the world.”

The facility is now a museum and is open for visitors, although it is still classified as a government building so one must be accompanied by a guide and pictures are not allowed.

Technology allowed Truman to be connected to the business of government by way of radio on a naval boat nearby.

Visitors watch a 10-minute video of Truman’s life which is quite inspiring. It is likely he will be the last president not to have a college degree, and his is the story of a farm boy made good. The tour guide claims that Truman’s mother-in-law didn’t think he was good enough for her daughter, Bess, even when he was president. It makes one wonder what else he could have done to have earned her respect.

Truman loved getting away from Washington, D.C., and was joined by his cabinet on his trips. As soon as he arrived he would change into his tropical Florida shirt and relax. He even encouraged his staff to have loud shirt contests.

He did his work during the day, and in the evening he played poker — for small stakes — at a custom built table. Bess Truman was always concerned that the public would frown on the president gambling, as she did, so the table was designed to have a cover so it looked like a regular round dining table during the day.

Before Bess made her first visit, the house, which was originally the base commander’s residence, was very much a man cave without a lot of thought put into décor. After her visit it was agreed that the residence should be refurbished and more presidential.

In 1991, the house was restored to its 1949 appearance. The decoration is quite traditional and not particularly exciting. It looks like visiting one’s grandparents’ home, which makes sense when one considers who it was decorated to please.

While subsequent presidents did not share Truman’s love for the house, it was still the scene of important presidential moments. In 1961, President John Kennedy held a summit there with British Prime Minister Harold McMillan, where they discussed the Cuba situation shortly before the Cuban Missile Crisis.

President Jimmy Carter held a family reunion there in 1996, and President Bill Clinton and Hillary Rodham Clinton vacationed there in 2005.

Any history buff would do well to visit the Little White House. The tour is informative and really gives an insight into Truman the man. He comes across as just a ordinary man thrust into a huge job.

Truman said, “Some of the presidents were great and some of them weren’t. I can say that, because I wasn’t one of the great presidents, but I had a good time trying to be one, I can tell you that.”

Key West’s Little White House was crucial for his mental well being to make big decisions.

When he left office, after firing the popular General Douglas MacArthur, his approval rating was in the low 20 percent. Truman wasn’t worried. He said years have to pass before history can really judge. Most polls rank Truman in the top 10. That makes him a great — although his mother-in-law may not agree.