MST’s ‘Wolf Hall,’ ‘Bring Up The Bodies’ a theatrical feast

HOUSTON — Political machinations, a social climber using her feminine wiles, alliances, intrigue and scandal. No, it’s not a post-election wrap up, it’s the 1520s in the court of Henry VIII.

Main Street Theater’s production of “Wolf Hall” and “Bring Up The Bodies,” adapted from Hilary Mantel’s Booker Prize-winning novels by Mike Poulton, is a sumptuous feast fit for a king.

The play follows the rise of Thomas Cromwell (Joel F. Grothe) as he rises through the ranks of the court to be Henry’s most trusted fixer. Cromwell’s rise is built on loyalty and cunning scheming.

The play begins with Henry VIII (Blake Weir) frustrated by the inability of Katherine of Aragon (Kara Greenberg) to provide him with a male heir. Let’s be honest, most people have at least a cursory knowledge of the tale of the Tudors, but these plays, set in the round in Main Street’s intimate theater, make it feel as though we are in the room with these historical figures, seeing their strengths and weaknesses in the flesh, getting up close with the doubts, fears and ambitions that drive their motives.

A notorious womanizer eventually turns to Anne Boleyn who, with the help of her (very close) family, manipulates Henry into seeking a divorce. Anne, played with devious deliciousness by Lisa Villegas, dominates the men of the court, while inserting herself between Henry and Cardinal Wolsey (Rutherford Cravens).

The hub around which the plays revolve is Cromwell. In “Wolf Hall,” he is the loyal protégé of Wolsey, helping him grease the wheels of power for the king. When Wolsey is undone by Boleyn and her supporters, Cromwell shifts to become the invaluable hand of the king. “Bring Up The Bodies” follows Cromwell’s consolidation of power — and the perils that come with it — as he helps Henry with his quest for an heir.

Grothe’s Cromwell is on stage for almost every scene of the two plays. In “Wolf Hall” our sympathies are with the lower–class boy made good — “The Grim Blacksmith” — as he watches his mentor, Wolsey, buried by his enemies. Grothe plays the part with solid good grace as a loyal friend and family man. In “Bring Up The Bodies,” we see Cromwell for the skillful operator as he gradually eliminates his political enemies. It is in the second play that Grothe really shines. He becomes more animated as he puts his plans into action and his confidence in his abilities grows. It is an assured performance worthy of the material. 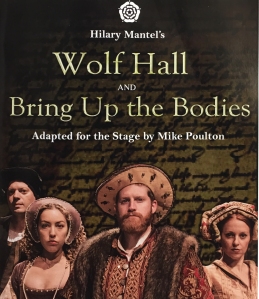 Main Street is not afraid to test itself with epic material, and in most cases, such as this one, the audience is rewarded by their bravado. The play, directed by Rebecca Greene Udden, is set in the round, with only minimal set pieces. The dialogue is crisp and often humorous within the deep historical events.

Shakespeare’s Henry IV says “Heavy is the head that wears the crown,” and Weir’s Henry VIII excellently reveals this to be true. Far from the one-dimensional blustering womanizer of some portrayals, Weir gives us a king that is truly worried about the country in the event of a fight over succession. Is he a “good” man? Not particularly, but he is thoughtful and, to the extent his upbringing allows, loving — though monogomy doesn’t really play into that.

Villegas is superb as Anne Boleyn. She is fully aware of how to use her sexuality to her advantage, and her rise and fall covers the full range of emotions.

The large cast of 24, many of whom play multiple roles, are admirable, with kudos to Joel Sandel as Sir Thomas More, and Will Sanders as Cromwell’s protégé Rafe Sandler.

“Wolf Hall” and “Bring Up The Bodies” are a must see for any theater fan or history buff. Sharp, witty and intelligent, it is theater at its best.

The plays run through Dec. 18. There are two more “marathon days” where the two shows will play back to back. It is an experience worth doing.