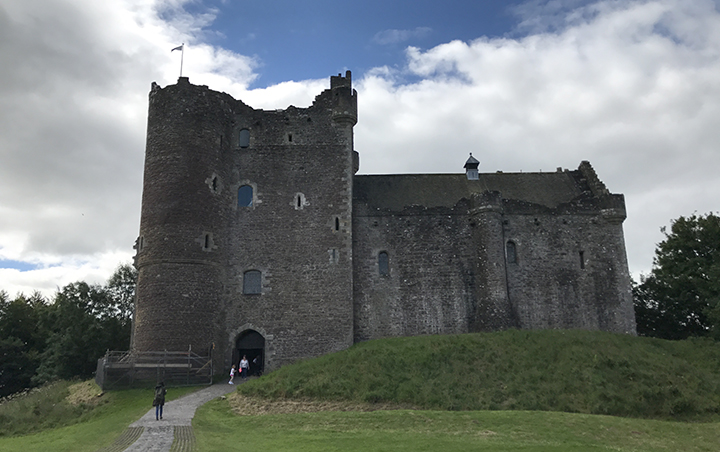 DOUNE, Scotland — At first glance, Doune Castle looks pretty much like any other dilapidated medieval castle dotted around Britain. But one should not judge a book by its cover or, in this case, a castle by its worn stone walls.

The castle is familiar as the setting for scenes from “Monty Python and the Holy Grail,” and as Winterfell in the “Game of Thrones” pilot, as well as, more recently, Castle Leoch in the series “Outlander.” The audio guide features narration by Python Terry Jones, as well as Sam Heughan, who plays Jamie Fraser in “Outlander.” Jones provides the history, while Heughan offers behind-the-scenes glimpses of his show.

The castle is sparse from the outside, and one could be fooled into thinking the inside is simply a ruin, but once inside, the rooms go on and on, in a labyrinthine maze of medieval opulence.

The castle looks out over the River Teith and has a view of the Scottish mountain Ben Lomand. In the 14th century, the Highland tribes would trade wool with the Lowland tribes. with Highlanders were quite aggressive, which caused problems. The Lowland king determined that weapons should be surrendered at the river crossing, meaning they were “armed to the Teith.”

The castle was built in the 1200s, damaged in the Scottish Wars of Independence, and rebuilt in its present form by Robert Albany in the late 1300s. The castle passed into the hands of the crown when Albany’s son was executed in 1425, and saw military action in the 17th and 18th centuries (including during the Jacobite Rebellion, a central plot point of “Outlander).

The Great Hall is a magnificent example of a 14th century living space, measuring 66 feet by 26 feet, and it is 39 feet high. There is no fireplace and historians speculate that there was probably a central fire with louvres in the roof for the smoke. In most houses of the period, the hall was the main living space for all of the house’s incumbents (for a detailed exploration of the evolution of housing, I recommend Bill Bryson’s “At Home,” which features the author’s trademark blend of detailed history, wit and easy-going style).

On the day of our visit, it was a positively balmy 65 degrees, but one can imagine the Great Hall brimming with activity and Highland revelry while the wind whistles outside. 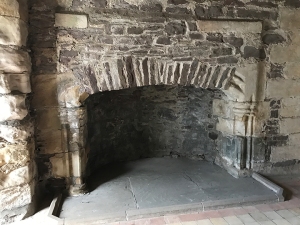 The Kitchen Tower houses one of the best examples of castle kitchens of the period, complete with an 18-feet-long fireplace and oven. A stair turret leads to two stories of guest apartments, including a “Royal Suite,” for special visitors, including Mary, Queen of Scots.

Aside from the serious history of the castle, “Monty Python and the Holy Grail” is an important part of the building’s legacy, one that its current guardians, Historic Scotland, embrace. It is a pilgrimage for fans of the film and a Monty Python Day is held annually. The “Camelot” musical number was filmed in the Great Hall and the “Trojan Rabbit” was filmed in the entryway and courtyard, among others.

It is a testament to the forward thing administration that they now cater to the “Outlander” loyalists as well. History must be maintained and that costs money. It is a trend that I have seen more and more, where historic sites use connections to popular culture to draw in customers, a trend that is smart and expands the opportunities to share history.

Terry Jones audio commentary mentions the Pythons, but he is also well known for his historical documentaries, and he offers insightful context for each room.

Castle Doune is a popular stop on a Highlands bus tour (which, if one has only a few days in Scotland, I highly recommend), and is a delightful way to spend an hour or two.

Entry is only 6 pounds and includes the audio guide.