Note: I am leading Lamar University’s study abroad group to my home town, Brighton, to study travel writing and photojournalism. As well as writing features about Brighton and beyond, I’m keeping a diary, of sorts, about the class experience. Here is part 5. 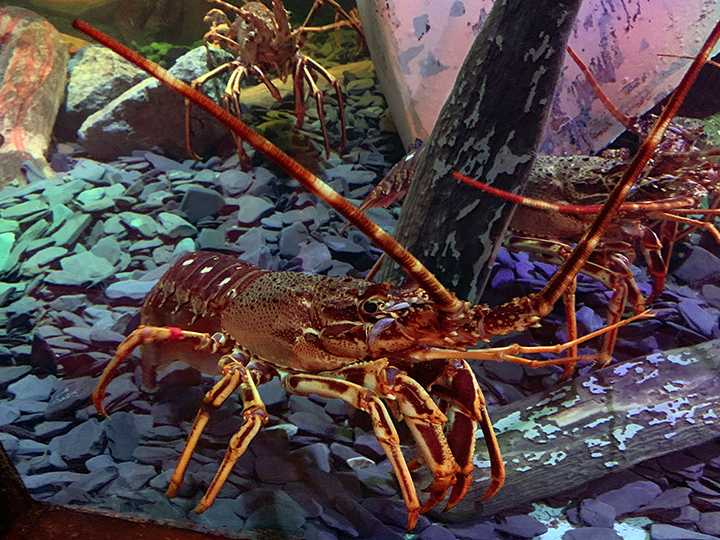 BRIGHTON, England — The last time I went to the Brighton Aquarium, almost 30 years ago, it had dolphins in a small tank and penguins. I didn’t think anything of the dolphins at the time, but now it seems pretty barbaric. But that was then and SeaLife Brighton, as it is now called, is quite different from when I was young.

This iteration of the world’s oldest continuously-operating aquarium is clearly aimed at young visitors and the snappy, colorful graphics educate visitors about the dangers of pollution and the need to be environmentally conscious.

The study abroad students and I visited the aquarium after spending the morning at the Royal Pavilion. It was its usual magnificent self and I have written about it in the past. The Pavilion, the SeaLife Centre and the i360 (of which more in another blog) are all included in the Brighton Explorer pass which is a good investment for visitors. The pass costs 36 pounds, but the three attractions individually add up to 46.50 pounds. The pass is good for 30 days.

The aquarium was designed by Eugenius Birch, who also designed the now-defunct West Pier, in 1872 at a cost of 133,000 pounds (5.5 million in today’s money). The original design was grand with arches and stonework to replicate Pompeiian and Gothic antiquaries. The building was sunk into the ground as the council would not allow it to be higher than the adjacent promenade at Marine Parade. A clock tower was added in 1874, as well as a frieze over the entrance that read, “And God said, Let the water bring forth abundantly the moving creatures that hath life.”

In 1927, work started on rebuilding the facility and it re-opened on June 12, 1929. Over the years the building has housed a variety of attractions, including the Montagu Motor Museum from 1961 to 1968, before becoming a dolphinarium, which closed in 1991, when Sea Life bought it and began work on a 1.5 million pound restoration.

The current iteration of the aquarium opened in May 2019 after a 2.7 million-dollar refurbishment and now boasts Britain’s largest collection of sharks and rays.

The wonderful Victorian architecture is lit with changeable LED lights that provide a wonderful atmosphere. The jellyfish are illuminated with constantly-changing colors and one can just sit and stare at them in a meditative trance.

The highlight is the new glass tunnel that allows visitors the chance to get up-close-and-personal with rays, sharks and turtles. Turtles Gulliver and Lula, the oldest in captivity at 80-years old, swim overhead.

There are more than 3,500 animals in the center, from fish to lobsters to lizards. It is fascinating to watch them up close. I spent more than 15 minutes just staring at giant lobsters crawling around.

The glass-bottom boat tour, which is extra, is slightly disappointing as the overhead light reflected on the glass and obscured the view, but overall, the SeaLife Centre is well worth a visit.