My recent visit to Barcelona was truly a bucket list experience. I have written extensively about museums visited and enjoyed, but there were many other things that are worthy of comment. Here are a few final thoughts and pictures.

The Arc de Triomf de Barcelona was built by Josep Vilaseca i Casnovas in 1888 for the Barcelona Universal Exposition, the site of which is now the Ciutadella Park.

A view of the promenade facing the Passeig de Sant Joan, from the Arc de Triomf.

The old walls surrounding the city were built as a defense between the 12th and 14th centuries.

The Hospital de la Santa Creu i Sant Pau was founded 600 years ago as a charitable home and is now a modern hospital. The need for healthcare was prompted by the Black Death which spread through Barcelona in 1348. The original hospital was founded in 1401 when six local hospitals merged. The hospital’s current 26 buildings date from 1901 to 1930 and were designed by Modernist architect Lluís Domenech i Montaner. It was here that Antoni Gaudi died after being run over by a trolley car.

The Hospital de la Santa Creu i Sant Pau (in English, the hospital of the holy cross and St. Paul) is known for its beauty. This mosaic is one of several decorative elements that complement the architecture.

La Monumental was built in 1914 and is an Art Nouveau bullring. Its formal title is Plaza de Toros Monumental.” In 2011, bullfighting was banned by the Catalonian Parliament. It now houses a bullfighting museum.

Take a trip down Passeig de Grácia and one cannot help but notice the decorative lampposts that line the street. They were designed by the Modernist architect Pere Falqués i Urpí. The 32 lampposts were built in 1906 and feature a bench built into the base. Like seemingly everything in Barcelona, they are decorated with pieces of ceramic.

Architect Frank Gehry is represented in Barcelona with his fish sculpture, “El Peix.” It is constructed of gold-colored stainless steel. The statue was built for the 1992 Barcelona Olympics. 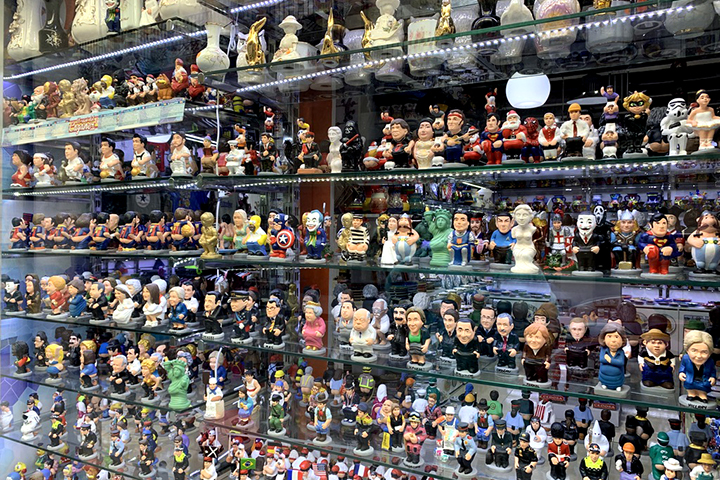 A peculiar figure in Catalan culture is “El Caganer” — literally “The Crapper” or “The Shitter.” The figurine is a traditional character that shows up in Nativity scenes in Catalonia. He is often shown in traditional Catalan red cap, squatting with his trousers down and a bare bottom. There is a swirly mound of poop on the ground behind him. Every souvenir shop in Barcelona has a variation on “El Caganer.” This photo shows just some of the the figures available, from the Pope to Donald Trump, Angela Merkel to Hillary Clinton, the Joker, Darth Vader, Rambo, Mick Jagger and the Statue of Liberty. There is also a wide selection of Barcelona FC soccer players, complete with team uniform. In fact, if someone can take a dump, there seems to be a figurine for it. It seems to be some sort of honor.

A variation on “El Caganer” near the Picasso Museum features the master artist. The difference? Instead of a swirly turd, Pablo is shitting gold coins. Now that’s commentary.