Patti Smith, The Big Easy, and me, part 1

I saw a meme on social media saying something about sharing gratitude in this time of coronavirus social distancing. I don’t do those kinds of things, but it did get me thinking about a very cool experience I had seven years ago.

It was May 2, 2013. Patti Smith was playing the New Orleans Jazz & Heritage Festival and I knew I had to be there. I had been a fan for decades but never seen her, so I took the day off work, filled up my old car with gas and headed down I-10 for the day. It only takes about three-and-a-half hours from where I was living in Orange, so I left at 6:30 a.m., planning to make a day of it JazzFest closes at 7 p.m. which meant I could be home by midnight). Also, leaving so early meant I didn’t have to strain the A/C on my car which was intermittent at best.

JazzFest has a cool vibe. I am not a frequent visitor, but I have always had a great time. Patti was playing on the second biggest stage, the Gentilly, and I fully expected to be quite a way away from the stage as there is always a large crowd who stake out prime spots. It didn’t matter, I was just happy to finally get to see her perform.

As luck would have it, by early afternoon the skies darkened and began pouring rain. The less hardy souls fled for the various tented gigs or under the grandstands. I hadn’t come all this way to bother about getting wet. I wrapped my camera in a plastic bag with a hole for the lens and made my way to the front railings.

There was a sparse but enthusiastic crowd and when Patti appeared, we cheered as loudly as we could. Known as the “Godmother of Punk,” she is a wordsmith the equal of Bob Dylan, Leonard Cohen and the best songwriters. Like them, she is a true poet. Her memoir, “Just Kids,” had been released a couple of years earlier and just added to the legend. I was in tears just reading the prologue, not because of its sadness, but because of the beauty of her prose.

So here she was, thin and smiling, in her standard uniform of jeans, T-shirt, jacket and waistcoat, topped off with a floppy wool hat. Her long-time collaborator Lenny Kaye led the band behind her.

I was glad it was raining as it obscured my tears of joy that seemed to flow every few minutes. I hear people refer to having a religious experience. That’s not really my thing, but this was as close as I’m ever likely to get. It was not just the songs. Patti Smith is a presence. People think of punk as being aggressive, masculine, angry. It can be those things. But the best of it is thoughtful, activist, intelligent — a call to action for a better world. Patti’s attitude is punk, but her message is positive, inclusive, loving.

Several times she apologized for making us stand in the rain. I couldn’t have cared less. She was everything I had imagined and more.

Then it happened. She walked to the front of the stage. “Maybe it will stop raining soon,” she said quietly, smiling, like she was talking to us individually. Then she started to sing, and almost as soon as she started the rain eased and the clouds broke. I am not going to go so far as to claim a beam of light shone from the heavens, but it brightened. Patti looked up and smiled, then laughed, and we cheered and laughed with her.

I am not by nature, blessed with a sunny disposition, but I was completely happy at the end of her set — her fantastic classic “Gloria.” I wandered around checking out a few other bands that have completely slipped my memory, until, at dusk, I walked back to my car, only slightly damp, ready for the drive home….

Part 2: A weary traveler in the Big Easy — and a dead battery. 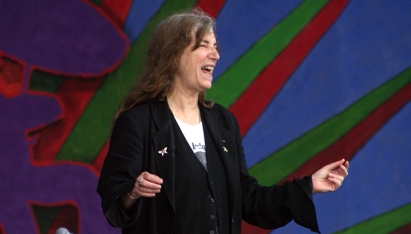 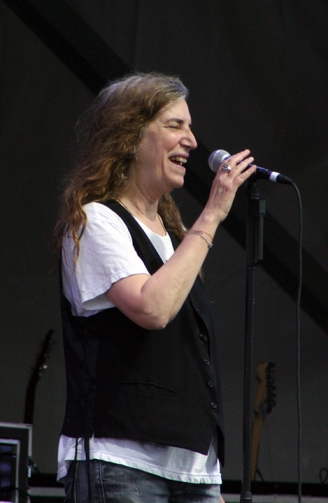 One thought on “Patti Smith, The Big Easy, and me, part 1”