SANTIAGO DE COMPOSTELA, Galicia — El Camino de Santiago is probably the most famous European pilgrimage. People travel from all points across Europe — indeed, from across the world — to the cathedral in Santiago, Spain, to see the tomb of St. James.

Thousands take on the task of walking the real camino from St. John Pied de Pont, France, to Santiago, a total of 733 kilometers (455 miles), which can take four to six weeks on foot.

Legend has it that St. James (which translates to Santiago in Spanish) was the first to travel the camino as he traveled to Spain to spread the word of Christianity (northern Spain being the edge of the known world at that time — remember Fisterre?). When he returned home to Palestine in 44 A.D., he was immediately beheaded by Herod Agrippa. Before his body was thrown to the lions, his remains were rescued by two of his followers and returned to Galicia in a small boat, where they remained hidden for nearly 800 years.

In 813, a monk supposedly discovered the tomb and a local bishop proclaimed that it was indeed the body of St. James, and the whole pilgrim business was born.

Many historians believe that the “discovery” was a way for Spaniards to unite other European countries in their battle against the Moors. Either way, a trip to Santiago is not complete without walking to the cathedral (in our case it was about a mile from the parking garage to the front door, but it is all uphill so that’s got to count for something). 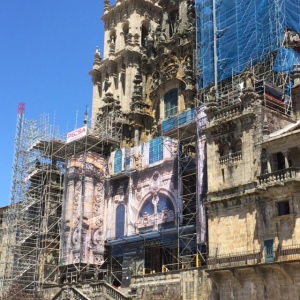 Regardless of one’s religious affiliations, no trip to Europe can be made without visiting cathedrals. I believe it is required at port of entry but I may be wrong. They are always big, gaudy and shiny (lots of gold) and pretty impressive structures. The cathedral in Santiago is no exception. It is impressive in scale and ornamentation. The facade is currently being renovated, but they have cleverly placed life-size photos over the scaffolding to show how it would look if one could actually see it. I found that quite impressive in itself.

A giant botafumeiro (censer) hangs about the congregation. A particularly overwrought gold one hangs above the gold-laden altar — which, by the way,has some of the largest angels I have ever seen. The censer is not used as much any more, but the incense-filled container used to be swung across the assembled throng to purify them — and also to cover the stench of the great unwashed masses who had just walked 455 miles. I have to say, there were quite a few moments when I wished it was still in use.

The pilgrims line up next to the small door where they climb the stairs to place their hands on the gold and jewel-encrusted statue of St. James and say a prayer. Below that, down some narrow stairs, lies the tomb itself, deep behind glass. The upstairs room is ostentatious and opulent. The downstairs tomb — for which there is no line, by the way — is unadorned and unassuming. I’m sure that says something about true piety, but I’ll let you make up your mind about that.

The pilgrims wear a sort of uniform — floppy hat, a long staff or two, and some sort of elaborate knee brace. Ramona pointed out that a great many of the people around the cathedral were limping. I suppose walking hundreds of miles for more than a month will do that to you.

I thought about that when I got a piece of grit in my sandal. I had to sit in one of the many sidewalk cafe’s with a glass of wine to recover. It’s a hard life.

The fact that many of them continue on to Fisterre amazes me. Despite my kidding, there is something impressive about taking the time to attempt the trip. I hope they find what they are looking for.